In December 2012, a number of successful, partnership, enforcement actions took place across the country to prevent the sale of counterfeit products to unsuspecting Christmas shoppers at markets. The following are some highlights.

Staffordshire Trading Standards Department, which has been operating the Real Deal charter since 2010, worked closely with Staffordshire Police, BPI and FACT in the seizure of counterfeit goods from an industrial unit in Birmingham. The operation was in connection with the supply of illicit goods to markets and car boot sales in Staffordshire. In excess of 56,000 pairs of Beats by Dr Dre headphones were seized along with other branded items including clothing, cosmetics and luxury leather goods. The estimated value of the seizures came to about £15 million.
(12 December 2012)

Warwickshire Police and Trading Standards seized fake goods, including counterfeit designer clothes and shoes, to the value of £140,000, which were on their way to be sold at Wellesbourne Airfield market. Eight vehicles were also seized.

County councillor Richard Hobbs, responsible for policy on community protection, said: “Criminals who manufacture and sell counterfeit goods threaten our high streets and the livelihoods of genuine traders. I am delighted that Warwickshire Trading Standards and Warwickshire Police are working in partnership to successfully crack down on people selling fake goods across the county, protecting consumers and legitimate businesses.”

In Glasgow, police arrested six people and seized counterfeit goods to the value of £250,000 in the Barras market including clothes, DVDs, tobacco, perfume and jewellery.
(22 December 2012)

Hounslow Trading Standards, Police, FACT, BPI and representatives of individual brand owners, made seizures at Western International Market of counterfeit goods, including clothing and jewellery, as well as around 5,000 CDs and 4,000 DVDs. The brands were out in force at the market, with a covert surveillance team identifying the target stalls before entering the market. Five vanloads of counterfeit goods were recovered.
(16 December 2012) 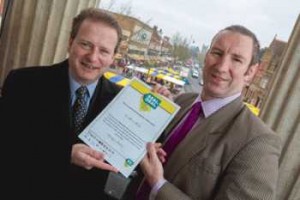 On the left is Cllr Beric Read, Portfolio Holder for Community Engagement and Localism at St Albans City and District Council, on the right is Guy Pratt, Head of Hertfordshire Trading Standards

Hertfordshire Trading Standards has helped St Albans Market become the third market in the county to sign up to a national pledge to help fight counterfeiting and promote fair trade.