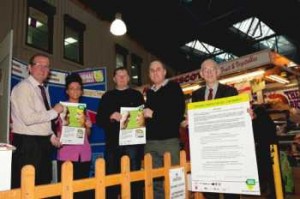 Considered one of the traditional cornerstones of British life, markets act as a hub for local communities and a thriving shop floor for legitimate traders. But sadly markets can also become susceptible to infiltration by unscrupulous crooks whose trade in illicit and counterfeit goods are threatening local economies, harming legitimate businesses and ripping off shoppers.

The good news is that the local markets in Wigan and Leigh are taking robust action to protect local traders and consumers from the trade in pirated goods. The team operating Wigan and Leigh markets this week signed the Real Deal charter pledging to work with Wigan Council Trading Standards to ensure the markets remain fake free.

“People who buy fakes might think they’re bagging a bargain, but the truth is the goods are poor quality and are sometimes even dangerous. Markets need to be vigilant to ensure that they are not infiltrated by illegal traders who are out to line their own pockets with no regards to local shoppers and businesses. By signing up to the Real Deal scheme, markets can protect their reputation as a safe and fair trading environment where shoppers can buy with confidence.”

“The trade in counterfeit goods is not a harmless or victimless crime. It damages local economies because it undermines legitimate shops and businesses which pay their taxes and provide jobs for the community. What’s more, communities can be damaged by the knock-on effects of criminal activity, as the sale of illicit goods are often linked to organised criminal gangs.The Real Deal award is an excellent example of a partnership initiative having a genuine effect at local and community level.”

“Whilst this is an issue for many markets across the country, our markets in the Borough are committed to safe and fair trading, selling a wide range of quality goods at reasonable prices. By signing up to the charter we are ensuring that our markets will remain vigilant to protect our customers from buying substandard illegal merchandise.”

To report anyone selling counterfeit goods, contact Consumer Direct on 08454 040506.