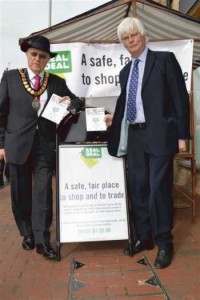 The Real Deal initiative is good for Ely’s Markets and shoppers. Ely Markets have signed up to be part of the ‘Real Deal’; an initiative to keep consumers safe and offering genuine, reliable goods.

East Cambridgeshire District Council – the organisers of Ely Markets – are the first in the county to sign the Real Deal national charter on Thursday 20th March confirming their commitment to safe and fair trading.

The District Council, working with Trading Standards Officers at Cambridgeshire County Council’s Supporting Businesses and Communities service have officially signed the charter and pledged to continue to ensure that fake goods and other illicit items are not sold on their markets.

It’s great news that we have signed the Real Deal charter. Regular customers will already know that Ely’s markets are fantastic for all their shopping needs but now the charter will assure everybody of the excellent standards that the traders consistently meet.

The Real Deal is a national campaign with some 342 markets in 70 local authority areas declaring proudly that they are committed to being free of fake and unsafe goods. The campaign is supported by an easily recognised logo so that consumers can see at-a-glance when they’re shopping at a safe, fair market venue that is the Real Deal.

It’s great to have East Cambridgeshire District Council on board with the Real Deal charter. Real Deal markets not only give consumers reassurance when shopping at them but also send a message to traders in counterfeit goods that they are not welcome at the market.

Officers at Cambridgeshire’s Supporting Businesses and Communities service will be looking for more markets to sign the charter across the county in coming weeks and expect that the easy-to-recognise Real Deal brand will see consumers choosing to shop where they know they can do so with confidence and shunning those that won’t commit to the Real Deal standards.