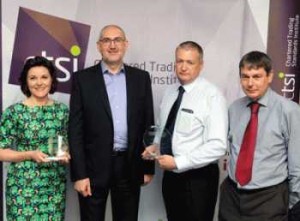 The National Markets Group for IP Protection (NMG), which consists of representatives from industry, enforcement and government, works in partnership to reduce the availability of counterfeit and pirated goods at markets, car boot sales and social media platforms such as Facebook.

Recent initiatives coordinated by the NMG and its partners have set about tackling counterfeiting activity at these locations.

Team Award
Camden Council Trading Standards, which has initiated an holistic approach to reducing the level of counterfeiting activity at the five markets in the London borough, scooped the NMG’s Team Award.

In carrying out a number of raid actions, as well as awareness raising activities amongst consumers and market operators, this partnership with the NMG and the market operator has seen a transformation of the Camden market place and made it a safer and more equitable trading environment for consumers and local businesses.

Association Award
The National Association of British Market Authorities (NABMA) was chosen by the NMG to receive its 2015 Association Award with special recognition to its Chief Executive, Graham Wilson OBE, for his long standing support and promotion of the Real Deal initiative, which sees market operators and Trading Standards departments working together, through a voluntary charter, to ensure that markets are kept free from counterfeit goods. The Award will be formally presented to Graham Wilson at the NABMA National Conference in September.

Martin Harland, Principal Officer at Camden Trading Standards said: “For Camden Trading Standards to win two team ‘inaugural’ awards for our IP enforcement work from NMG and ACG is fantastic news. With the addition of team member David Hunt’s individual ‘highly commended’ award, they are very well received in recognition of our new successful working partnership with the ACG and the National Markets Group. This new way of working is now having an effect on the supply of counterfeit goods in the borough’s markets and shops which can only improve the local economy in the borough for business as well as for residents and visitors. It is a terrifically tremendous morale booster for a small team of four officers.”

Mike Andrews, National Coordinator, National Trading Standards e-Crime Team said: “The National Trading Standards eCrime Team, working with our partners in the National Markets Group, are taking a robust stance on criminals who exploit social media to sell counterfeit and dangerous products. We are delighted that Sharon’s hard work has been recognised by the Group. Sharon has demonstrated a high degree of professionalism and diligence and fully deserves this award.”

Graham Wilson, Chief Executive of NABMA said: “NABMA is delighted to support the Real Deal campaign and I hope our partnership working will continue into the future.”

Graham Mogg, Chair of the NMG said: “Since its inception in 2008, the NMG and the Real Deal campaign have been at the forefront of the battle to reduce the availability of counterfeit and pirated goods in the market place. We are proud of our achievements and even more delighted that we have been able to recognise the outstanding contribution of the award winners in this way.”

The National Markets Group and its Real Deal initiative bring together practitioners and policy makers from industry, enforcement, local authorities, the markets sector and government to reduce the availability of counterfeit goods at markets, car boot sales and on Facebook.

The Real Deal operates a voluntary charter and code of conduct bringing together Trading Standards and market operators to ensure that markets are kept free from counterfeit goods and that consumers and business alike share an equitable trading environment. Over 380 markets and 86 councils across the UK have so far implemented the Real Deal Charter.