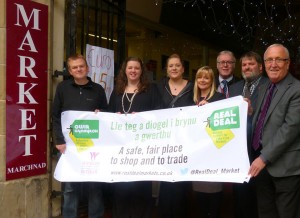 Winter 2015/16.
During 2015, the Real Deal campaign continued to go from strength to strength, thanks to the endorsement and backing from our many partner organisations, and the financial support provided by our sponsors (see below) and OHIM, the EU Office for Harmonization in the Internal Market (Trade Marks and Designs); plus, of course, the work, on the ground, of the individual local authorities, trading standards officers and market operators who have implemented the Real Deal Charter this year.

Without the support from all these quarters the campaign would not be in the strong position it is in today: at the launch of its annual IP Crime Report, the Intellectual Property Office highlighted the initiative as ‘one of the key operations and partnerships that have delivered great results in 2014-15.’ The IP Crime Report also noted that reports to Crimestoppers of counterfeit goods related to markets have fallen significantly, adding, ‘It is notable that ‘market’ is the only physical location to have seen such a significant reduction in reports, which suggests that the Real Deal campaign has had a major effect in encouraging market operators to actively look out for and prohibit the sale of IP infringing goods.’

Earlier this month, the IPO launched a superb short film highlighting the partnership work, which has been implemented over several months, by London Borough of Camden Trading Standards and members of the National Markets Group to tackle the trade in fake goods at the markets in Camden. You can view the video here.

Partnership Work is the ‘Way Forward’

In the IPO video, Martin Harland, Camden Council Principal Trading Standards Officer, summarises the project’s success in reducing counterfeits at the market: “Partnership working is the way forward, he says, “without that, we couldn’t achieve the impact we have here.” It’s an ethos that has been replicated in towns and markets across the UK this year, from Scotland’s largest car boot fair Errol Sunday Market signing the Real Deal Charter with Perth & Kinross Council, to the iconic Portobello & Golborne Road Market entering into the Real Deal partnership with RB Kensington & Chelsea.

Another excellent example of partnership work took place in October when, for the first time in the UK, six local authority trading standards services in North Wales joined forces to simultaneously roll out the Real Deal Charter across markets in the region. Representatives of the project are pictured above at the Real Deal North Wales launch.

In September, Selby Market became the launch pad for the Charter in North Yorkshire, which was followed up earlier this month by North Yorkshire County Council trading standards officers manning a ‘pop-up’ stall at the market, stocked with an array of fake goods, including dangerous electrical items, to get the ‘Real Deal’ message across to local Christmas shoppers.

In the summer, The Black Isle Show, one of the leading highland shows in Scotland, signed up to the Real Deal Charter with Highlands Council Trading Standards, demonstrating that market venues of all shapes and sizes can implement effective procedures to prohibit the trade in fakes.

In Cambridgeshire, trading standards officers with Cambridge County Council continued the roll-out of the Real Deal across the county, with March and Wisbech markets becoming the latest to sign the Charter. Whilst in Lincolnshire, a magnificent total of 35 markets and car boot fairs have so far joined the scheme, with Lincolnshire Trading Standards regularly carrying out market visits and using social media to spread the fake-free message.