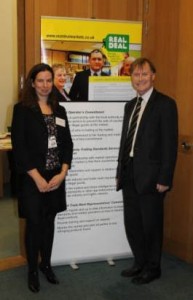 David Amess is pictured with Susie Winter from the Alliance Against IP Theft at the recent Real Deal briefing event at Portcullis House, Westminster.

“A recent survey has shown that 16% of the population would quite happily buy fake fragrance. I would like to advise against the purchase of fake perfume; not only is it economically damaging, costing the real industry as much as £319 million a year, but it is dangerous for the user, with the potential for allergic reactions. I congratulate the Real Deal campaign on what it is trying to do.”