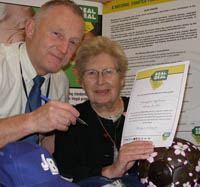 In the run up to Christmas, Birmingham Trading Standards is teaming up with the council’s markets division, West Midlands Police and the Real Deal Campaign for Fake-Free Markets to ensure that illicit traders don’t sell fake goods to shoppers.

On Thursday 22 November, the launch of the Real Deal in Birmingham was held at the city’s Council House where Cllr Barbara Dring, Chair of the Licensing and Public Protection Committee, signed the Real Deal charter on behalf of Birmingham Trading Standards. Mick Taylor, Principal Officer wholesale/estates management, signed on behalf of the council’s markets. The event was also attended by other councillors, members of the trading standards team, police representatives and media. A selection of counterfeit items, seized by trading standards from markets and car boot fairs in the Birmingham region, was on display.

Cllr Barbara Dring, said: “Markets are a great British tradition and bring many economic and social benefits to the city, which is why the city council is determined to play its part in stamping out the sale of fake goods to Christmas shoppers. Signing up to the Real Deal charter demonstrates our commitment to providing safe and fair markets. Unscrupulous traders selling counterfeit or illegal goods will be prosecuted. It is important to remember that counterfeit goods are not a victimless crime, and the money generated from their sale often goes back to support wider criminal activity.”

The Real Deal initiative is a cross-sector partnership campaign, bringing together local authority trading standards, market operators and traders, industry groups, and copyright and trademark owners, all of whom are committed to ensuring that UK markets and car boot fairs are fake-free zones.