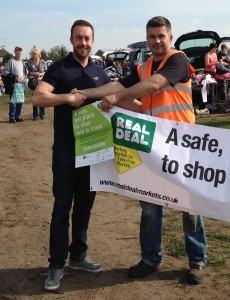 Staffordshire county council has now signed its third Real Deal agreement with the organisers of a car boot event in South Staffordshire. Ashwood Car Boot Fair has joined the campaign, which aims to clean up the sale of counterfeit goods. The campaign brings together councils, market operators and traders, industry groups, and copyright and trademark owners. Event organisers signing up to the Real Deal charter are demonstrating their commitment to tackling counterfeit goods sales and keeping visitors safe.

Staffordshire County Council’s cabinet member for trading standards Gill Heath said: “We’re asking market and car boot event organisers across the county to get on board and sign up to the Real Deal charter. It sets out their commitment to tackling the problem of counterfeit goods sales and sends out a message that their events are safe and have responsible traders. Counterfeit goods can cause real harm, for example if they are cosmetic or electrical items and they also damage our economy. It is in everyone’s interests to combat the sale of such goods and it is important we all work together to do this.”

Matthew Roberts, organiser of Ashwood Car Boot Fair in South Staffordshire said: “We are pleased to be working in partnership with The Real Deal and Staffordshire County Council’s trading standards team to help continue the fight against the sale of counterfeit goods and to continue to provide a safe and friendly car boot environment for our customers.”

Counterfeit goods are shoddy imitations that will leave people out of pocket and could cause serious harm. Fake electrical goods are hazardous as they can cause fires and electrocution. Harmful substances such as high lead levels in perfume are a risk with counterfeit cosmetics. Legitimate traders suffer as a result of counterfeit sales; harming the local economy in the process. Money made also goes into the pockets of organised criminal gangs.

Gill Heath added: “We want people to avoid the pitfalls of counterfeit goods this bank holiday weekend and throughout the year – protecting themselves and legitimate businesses.

“Counterfeit goods are increasingly hard to detect just to look at, so when something is being sold at a knock-down price, people should be extremely wary. We always say that if something is too good to be true, it usually is.

“Anyone who buys counterfeit goods will land themselves with shoddy goods which may be dangerous and at the same time line criminals’ pockets.”

Some of the hidden dangers of counterfeit goods include: • Counterfeit alcohol such as vodka contains dangerous chemicals which can cause may health problems such as blindness • Counterfeit perfume can often burn skin or leave a nasty rash and may contain lead • Fake sunglasses often offer no UVA protection, causing eye damage • Fake or illicit tobacco often contains unknown chemicals, higher tar levels and cigarettes can be a fire risk as they do not burn out like legitimate products • Counterfeit children’s toys can often be unsafe with unsuitable small parts and children’s clothes may be inflammable. Anyone wanting to report counterfeit goods sales can call the anonymous Staffordshire Fight the Fakes line on 01785 330356.