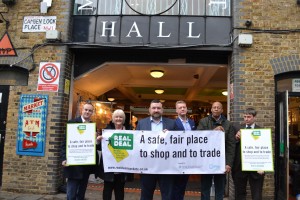 Camden Market has joined Camden’s Council run markets in signing the national ‘Real Deal’ campaign charter. Residents and visitors to Camden’s iconic markets can shop with confidence following the signing by both organisations committing to combat the sale of counterfeit and other illegal goods. Councillor Jonathan Simpson, Cabinet member for Community Safety said: “Camden’s markets are a big attraction to both residents and visitors and help contribute to the borough’s vibrant atmosphere.  “Unfortunately markets are not uniformly regulated and can offer opportunities for those who wish to trade illegally, particularly in counterfeit and pirated goods, undermining the reputation of the venue.”

The Council run markets in Camden signed up to the Real Deal in January 2015, to combat the sale of illegal and counterfeit goods. Deborah Carpenter, Camden Council Market Development Manager said: “We are delighted that Camden Market has joined us in signing the ‘Real Deal’. Together we can make Camden a better shopping destination for everyone. The Real Deal initiative, brings together Camden’s trading standards, market operators and traders along with industry groups all of whom are united with a common commitment to tackling these problems.”

On behalf of the Real Deal campaign, the project’s co-ordinator, Patricia Lennon, said: “All the stakeholders in the Real Deal campaign are delighted to see the council-run and private markets in Camden uniting to show their support for fake-free trading. We would like to thank Camden Council Trading Standards team and all those who have worked with them over a concerted period in implementing the Real Deal.

“By signing the Real Deal charter today, the market operators and trading standards are giving an assurance to shoppers and traders and also sending a strong ‘keep-out’ message to counterfeiting con-men who do not care about ripping-off consumers, selling unsafe products or damaging local businesses.”

Jonathan Dixon, Camden Market Facilities Director said: “We are very pleased to sign up to the Real Deal initiative alongside Camden Council. This step shows our commitment towards providing a genuine shopping experience across Camden Market and re-enforces our mission to support original, authentic traders and designer makers within the markets.”

To help shoppers and traders a national markets’ charter, was created in consultation with partners which sets out the key principles for market operators, trading standards, industry and trademark representatives to sign up to and abide by. Signing up to the charter demonstrates an organisation’s commitment to safe and fair trading at their local market with local arrangements to reflect local circumstances. Camden Council’s Trading Standards Team, has been working to target the sale of counterfeit and other illegal goods on sale in the shops and markets across the Borough.

The Real Deal initiative works hand-in-hand with the enforcement work carried out by the Trading Standards team to combat counterfeit and other illegal goods. Counterfeit goods push out the sale of legal and legitimate goods, reducing the market place in terms of the diversity of goods sold, and undermining the confidence consumers have in their quality and safety. The illegal nature of these goods also means that any profits made can find their way into the hands of individuals involved in more serious criminal enterprises. Since May 2014 Camden Council’s Regulatory Services Trading Standards Team has seized in excess of 17,000 items worth millions of pounds.